Welcome to 2021! Now nobody make any sudden moves! Seriously, in spite of 2020’s notorious difficulties and setbacks, there was still a lot that we accomplished, and a lot to be grateful for. Before we look to the future, we wanted to take a moment to look back on the year and some of our highlights. Even though we missed out on our favorite conventions, on seeing each other in person (Calliope Games’ team members work remotely in both the US and the UK), and most importantly, on playing games with each other, we still got to make new memories and learn new skills. And that’s something to be proud of!

In February we attended our first and only convention in 2020: New York Toy Fair! We had a wonderful time showcasing some Calliope favorites, and debuting Tsuro Phoenix Rising to the retail world. We even gave a sneak peek of Mass Transit, which got a shoutout in Forbes Magazine!

In March we welcomed Risa to the team as our new Social Jockey, and she was off to the races! We’re sure you folks have noticed an increase in blog posts and our social media presence since she joined the team (she is also currently pretending that she’s not the one writing this blog post.) Then in April we expanded the team again with the addition of Ken as our Senior Yeoman. Ken already had a wonderful history with Calliope Games as the designer of The Manksy Caper, and we were thrilled to bring him onto our team.

As we focused on staying home, and putting our plans for conventions on hold, we turned our attention to gaming with the immediately family, as well as online and remote gaming with friends we couldn’t see in person. We recommended movie and a game night, ran a contest for gaming at home, and set forth into the world of Tabletop Simulator and Tabletopia! Turns out you can teach an old dog new tricks, and our entire team took to the challenge like a duck to water. Ken worked tirelessly to adapt several Calliope titles to Tabletop Simulator, and soon we were not only playing games together online, we were also streaming. Which brings us to…

In the beginning of August we participated in Gamers Engaged for Food Lifeline with Mox Boarding House. We streamed for 12 hours on the brand-new Team Calliope Games Twitch channel, played 14 games, and raised $2,100 for Food Lifeline. That’s 10,500 meals for folks struggling with food insecurity. We gave away board games and swag, we raised awareness, and we had a wonderful time. We are so grateful to the Calliope Games community for joining us, hanging out during the day, and donating to such an excellent event.

The tail end of the year was our busiest yet. October saw the release of Station Master, which has been finding its place on more and more folks’ game shelves. We sponsored the Design Your Own Trivia Game Challenge with Legends of Learning, where students in schools across the country created their own board games. And in November we launched a highly ambitious Kickstarter comprising of not one but three new games! We brought Mass Transit, Enchanted Plumes, and Allegory out to play, and used all of our newly acquired resources to make sure everyone had a seat at the table even without conventions to demo.

For the very first time we had games available on Tabletop Simulator for folks to try out before backing. We had the games being played in livestreams, both in physical and virtual form. And 679 backers decided to make the Calliope Game Night Extravaganza a part of their gaming collection. Production has already begun on all three games and we can’t wait to get them onto game shelves in 2021!

So there’s the short (well, as short as we can make it) and sweet of Calliope Games 2020. We have some exciting plans for 2021, and a few things still to be determined. One thing we know for sure, we’re glad you’re along for the ride with us. Happy 2021 everybody!

On Sunday August 9th, 2020, Calliope Games is participating in an incredible event with Gamers Engaged, the giving arm of Card Kingdom and Mox Boarding House, where we will be streaming and playing games from 10am-10pm PST to raise money for Food Lifeline.

Food Lifeline provides the equivalent of 134,000 meals every day, and every dollar we raise provides 5 meals. Our team goal was to raise $1,000, and thanks to your generosity we have already smashed that goal!! Along with an incredible donation was a challenge: “$1000 as a goal is too low. Aim high! We love each other!” So we’ve DOUBLED our goal! Now we want to raise $2,000, or 10,000 meals for Food Lifeline.

All throughout the day we will be playing your favorite Calliope games in a multitude of ways; from Zoom calls to good ol’ fashioned round-the-table gameplay. We are also thrilled to announce that Ruel Gaviola (whom you may remember from the Accommodations for Colorblind Players article) will be playing ShipShape with his family as our special guest. There also may be a super secret playthrough of an upcoming Calliope game that hasn’t even hit Kickstarter yet! If you want to know when it’s live, make sure you’re following us on social media, or sign up for the Kickstarter Preview newsletter in our sidebar –>

And just to sweeten the pot, every person who follows us on social media (Facebook, Twitter, Instagram), signs up for that Kickstarter newsletter, or donates, is entered in a raffle to win some con-exclusive Calliope swag! We want to give our thanks to you all for joining us for this incredible event. We literally cannot do it without you.

We hope you’ll join us on Sunday, and that you’ll watch, comment, share, enjoy, and if your wallets can afford it, that you give back and make a donation. Remember, $1 provides 5 meals, so truly every little bit helps.

FTW Events and Calliope Games invite you to the inaugural Top of the World Board Game Extravaganza benefiting The Imagine Guild at Children’s Hospital! Kick off Emerald City Comic Con with us by playing games, winning prizes, eating delicious food, and mingling with game designers! Click here for more details!

This past weekend, our friends Echo and Lazarus arranged to host over 100 children at their home. Each child was given a gift, a hot drink, and cookies or cupcakes. They played games, colored some of Echo’s artwork, and made ornaments. Best of all, they received a visit from Mr. Claus himself! END_OF_DOCUMENT_TOKEN_TO_BE_REPLACED

Join hundreds of gamers from around the globe as they play games and raise money for Children’s Miracle Network Hospitals! END_OF_DOCUMENT_TOKEN_TO_BE_REPLACED

Have you heard of Extra Life? If you like playing games and helping sick kids, it is relevant to your interests.

Calliope is proud to announce its support of Extra Life’s Team Troll. END_OF_DOCUMENT_TOKEN_TO_BE_REPLACED 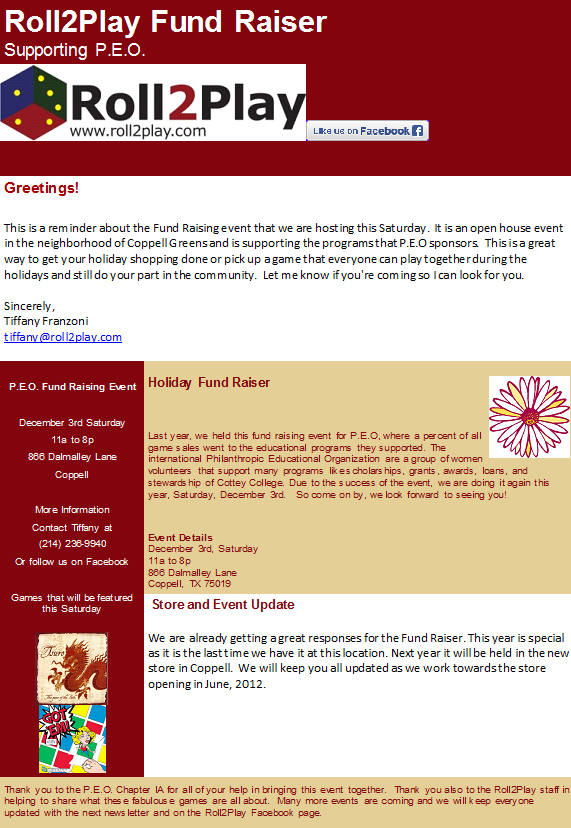